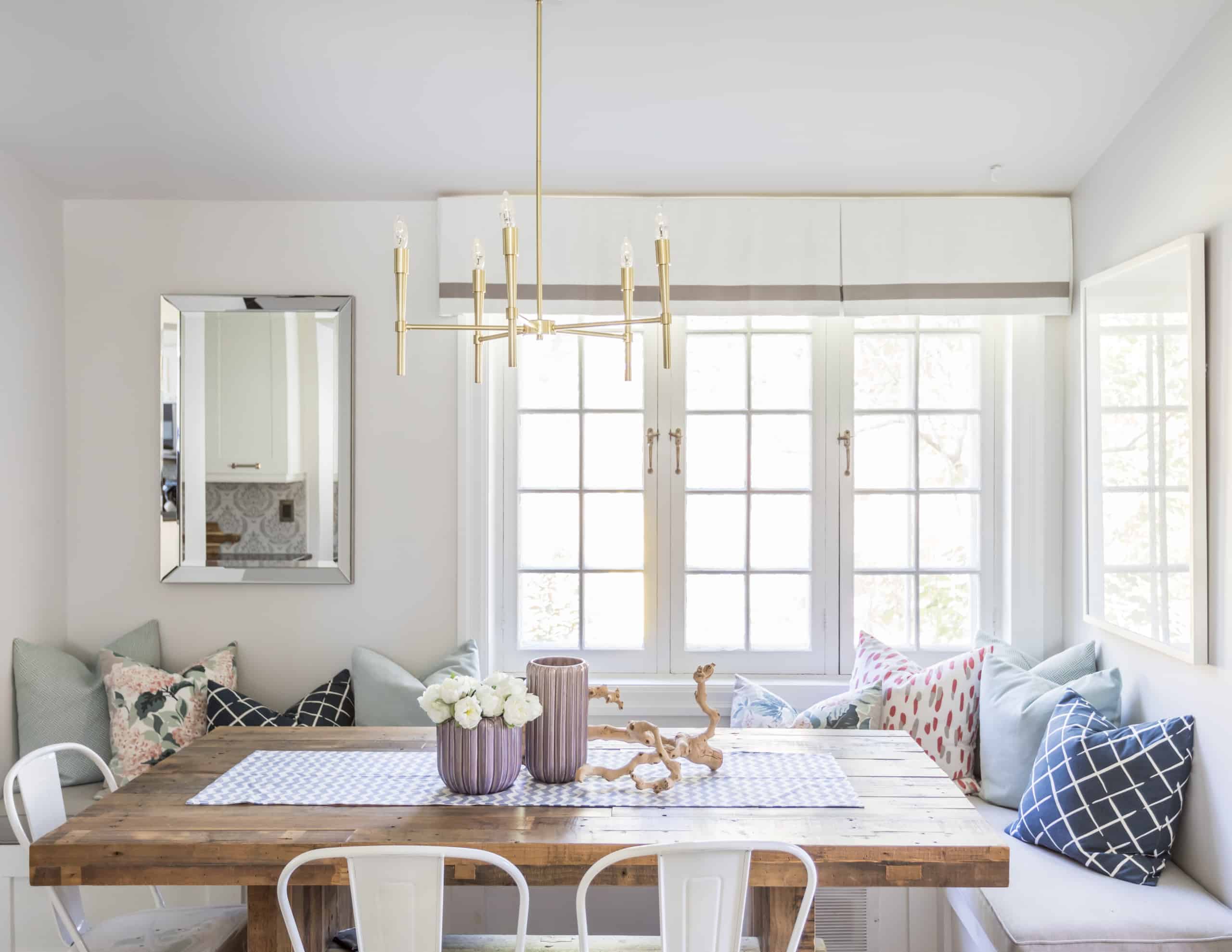 Take a drive through the idyllic Gables Court and you’ll immediately understand why families love to call this quaint community home. Picturesque streets with soaring trees line the laneways dotted with unique mid-century homes, which are complete with spacious yards. A local pool, beach, and safe streets for riding a bike round out all of the must-haves for little ones.

When Stephanie and Ben Tuff moved into their home in Gables Court, the first order of business was the exterior: they wanted to modernize the deep blues to a brighter, more welcoming hue – but didn’t know where to start. “We knew that this was a huge undertaking, and if it went wrong, we’d regret it every time we drove up our driveway” remembers Ben.

And so began their relationship with Lux Décor, and the subsequent transformation of their home. Which was once an eclectic estate with a wide variety of colours, textures and finishes quickly became a sleek, warm and functional space – perfectly fit for their young family of four.

When the living room was next on the list – it took Ben some convincing when it came to hiring a designer and paying for the design fees, as he mostly considered it a luxury expense. “I was definitely skeptical at first. For the exterior paint, I knew it was something we had to live with for a long time, so I wanted a professional opinion”, yet once they had a contractor take care of key elements like refurbishing the fireplace and installing extra lighting, they didn’t know where to go next.

Once budgets were defined and the task was underway, it wasn’t long before Lux Décor’s team was completing the living room facelift. The bright sun pours in from the large front windows, casting light on their favorite piece: a Decor Rest marble coffee table.

Post-living room, Ben and Steph consulted the Lux Décor team for their breakfast nook, which needed a small facelift as well. Though their kitchen renovation had been completed upon the home’s purchase, but it still needed some personalization and coziness to match their everyday life. A few pops of colour with cushions and accessories, and the space was officially “theirs.”

And now for the den. The previous owners had used the home’s back room as a study, complete with a dated built-in bookshelf and desk, but Ben and Steph envisioned the room becoming a playroom for their daughters. “Stephanie found this really cool nautical-looking room on Pinterest, and I tried to recreate it” notes Ben. “I spent one weekend sanding the bookshelf, another weekend painting it, and then a third weekend painting the room this light blue colour.” Needless to say, it didn’t turn out the way Ben had expected, “Steph came home and said, ‘oh no! This is bad! This looks like a little boy’s room!’”

From there, Ben and Steph realized the time and money they spent attempting to do a space on their own would actually turn out to be more expensive, not to mention frustrating, than having Lux come in and work their magic. “We called them and said, ‘it’s time for the den. Do your thing.”

Though the initial intention of the den was to have a playroom for the kids, the room has become one of the most used spaces in the house. “We said to them: the space needs to be able to be damaged by crayons, but still has to look polished. There will be young kids drawing on the surfaces and ruining things. Use IKEA wherever you can – but balance it out with great pieces too.”

The Lux Team went to work to create a space that was durable yet stylish, imaginative yet sleek. It’s a space that was created to work with kids, but also grow with kids as they get older. It will be a homework nook, a lounging space, a playroom; it’s always evolving, just like the family. Lux’s in-house designer Melissa Torres opted for an eclectic blend of colours and patterns. Of the transformation, Ben notes, “Our favorite piece in the den are these teal lamps Melissa chose. Before Lux arrived, this room was unused — now it’s a gathering point of our home.”

After their entire downstairs has been reworked by the Lux team, Ben & Steph’s next order of business is the basement, likely to come in the next few years. As the home grows alongside the family, their vision for the basement – much like the home itself – is for a space that their daughters will love to call home, “Something with a big comfy couch; a nice space for our kids to hang out with their friends in the neighbourhood.”

Want to add #LuxDecorLiving to your space, too? Contact us here.